Back with his third solo album “When Reality Is Nothing”, Moonlight Comedy guitarist Simone Fiorletta takes the listener on a voyage through a myriad of rock guitar textures and expressions. Building upon the foundations laid by his two previous solo efforts (“Parallel Worlds” and “My Secret Diary”) Simone has come up with an album that shows a change in his approach to the instrument, with a more earthy texture and mature penmanship yet all led by the luxurious guitar work that has earnt Simone a legion of fans.

“When Reality Is Nothing” is a solid rock guitar album with each tracks inspiration coming from Simone’s own personal experiences, mirroring his soul. Opener “Thanx” is a dedication to Simone’s own parents, whilst “My Brother” is a musical reflection of his brothers’ personality and spirits. More earthy topics also were sources of inspiration with “Like A Bird” being penned to represent a sense of freedom.

“When Reality Is Nothing” was written and recorded over a short space of time from Nov 2008 to March 2009. This timescale helped lend a new freshness to Simone’s solo work, and indeed further inspiration derived by it being the first album to be recorded, edited, mixed and mastered personally in Simone’s own studio "SF Digital Studio", with the exception of the drums being recorded by Sandro Assante at "BlabLab" Studios.

“When Reality Is Nothing” is an album that will appeal to fans of early albums from Joe Satriani (The Extremist) and indeed those from one of its contributors Neil Zaza. Simply said an enthralling release for anyone with an interest in modern rock guitar. 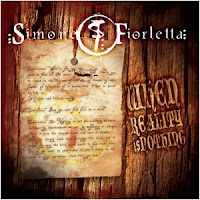