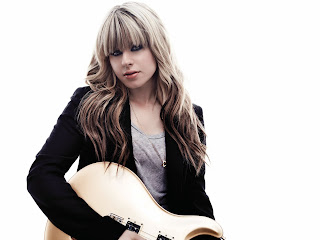 Have you had a ‘Spinal Tap Moment’ on stage where something totally unexpected has happened to you?

Yeah! I used to play in a cover band from when I was about fifteen until I was about twenty in Adele. We used to play two or three nights a week, Top 40 stuff. We played a wedding one time out in the country. This one guy was really drunk and poured his beer into the fold-back and the wedges, the power went out and he fell. During his fall he hit the mic which bruised my lip and he fell into the bass drum! [laughs] That was very… dramatic! [laughs] It is kinda funny looking back on it but it wasn’t funny at the time. But yeah, I try not to trip over chords, especially when I am wearing high heels. It was a challenge running up in wedges for the ‘This Is It’ show. I was thinking the whole time that I was going to land on my butt! [laughs] As a guitar player, I don’t know if we have the best sense of direction but trying to find the stage with the band is sometimes a challenge! Definitely Spinal Tap! [laughs]