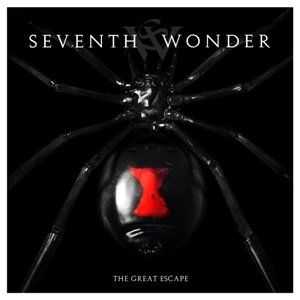 
One of the most anticipated releases in the progressive metal genre is released on December 3rd 2010. Having built a reputation as one of the most exciting, skilled and enthralling metal acts currently on the scene as well as making a name for themselves with potent live performances Sweden Rock Festival and two shows at the prestigious ProgPower USA, Swedish progressive metal masters Seventh Wonder have raised the bar even further with “The Great Escape”.

This spectacular new album is a continuation of where the band left us last with 2008’s “Mercy Falls”. The band’s trademark first class melodies and great choruses are still in focus along with astonishing lead work from all musicians throughout the CD. Yet there is for the first time in Seventh Wonder history a really epic track on the album with the adventurous title track that clocks in at 30 minutes.

The story of this track is based on the epic space saga Aniara, written in 1956 by Swedish Nobel Prize winner Harry Martinson. The band even obtained written permission from the author’s daughter who holds the copyright, to use phrases from the original book after hearing a few Seventh Wonder tracks and liked them. The rest of the lyrics on the album sees the bands usual wide variety of topics dealing with everyday life and challenges in our modern society, as well as more fictional stories and historical themes. Some other novel musical excursions also appear on the album, while staying true to the Seventh Wonder formula of writing music.

Sonically the new album is somewhat drier than its predecessor “Mercy Falls” and in that sense more reminiscent of the sound on “Waiting In The Wings”, a more guitar driven sound. The sound is still very clear such that all instruments are clearly audible, as we have come to expect from Seventh Wonder releases with the album being a great reflection of the power the band possess in the live arena.

Never an act to stand still the band wanted to try something new this time. The new stuff constitutes about half of the albums playing time and is made up of the aforementioned epic title track on one hand and the slow, almost poppy song “Long Way Home” on the other, featuring Jenny Karevik on additional vocals and Andreas Blomqvist playing fretless bass, adding to the different feel of the track. If these two tracks represent the new flavour, then the rest of the songs are exactly what you would expect from Seventh Wonder, only newer and better.

In the build up to release the band made their first promotional video for the song “Alley Cat” which scored over 20,000 hits on YouTube within 14 days of upload and at the time of writing has had over 35,000 hits. A clear sign the band are ready to move to the next level in terms of popularity.

“The Great Escape” features some new flavours for the Seventh Wonder fans indeed, but always staying true to the formula that have gained them thousands of fans around the globe; -technically advanced progressive metal with hooks and melodies to die for.