Hedras Ramos: Atoms and Space pre-order has some special goodies 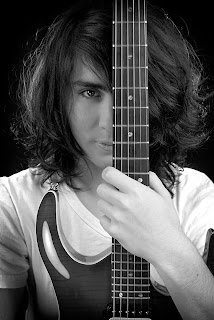 The official world wide launch is on May 7th. The album will be available everywhere (i Tunes, Amazon and much more) and physical CDs at CD Baby. The album has 13 songs and includes the hits Insanity of the Atoms and Virtual Tangles.

However, you can pre order the astonishing following up to the critically acclaimed Insanity of the Atoms. Atoms and Space is sure to cement Hedras Ramos in the pantheon of top guitar players. The album also features stunning guest solos from Jennifer Batten (Michael Jackon), Muris Varajic and Andy James, plus Sergey Boykov on Keyboards and Billy Ashbaugh on Drums (Greg Howe).

All pre orders receive a special video created by Hedras Ramos, featuring stunning playing from the album and some guitar tab. Also the first 100 orders will get a special goodies kit which includes an autographed promotion photo, the Hedras Ramos bumper sticker, and special promotional discount voucher for Halo guitars.

Anywhere in the World (Continental USA excluded)
Note: any charges of customs/duties has to be covered by the purchaser