Guthrie Govan: the Aristocrat makes it to the big time! 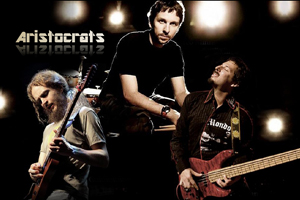 Besides working on getting the debut album from this super power trio finished, I've been super busy planning and organizing short regional tours for this band and here's what I have so far. A short US west coast tour in late-June and a Far East tour of Korea and Japan in July-August are essentially set in stone.

We're working on the exact dates and other details for the following cities and we expect to have everything finalized by the end of May.

We're shooting for early-November but other things will need to fall into place first. The countries we're looking at for Europe are:

UK, Netherlands, France, Sweden, Germany, Italy, and Spain. Can't guarantee that we'll make it to all of 'em but we're starting to get the feelers out now.

Guthrie is finally getting the recognition he deserves in the mainstream guitar press. The July issue of Guitar Player will feature Guthrie on the cover with a big article/interview story that heralds the arrival of a major talent in the guitar scene. The issue will hit the newsstands in early-June.

It's been a long time coming but better late than never and this is only the beginning because Guthrie's career is still at the early stages with just one solo album and the Aristocrats super power trio album still in the works. I'm planning a lot of clinic-concert tours for the remainder of this year and all of 2012.

The attendance during these tours has been rising steadily over the past few years and that last show of the tour in January culminated with nearly 1,000 people at the Berklee Performance Center in Boston on Jan 28, '11. Here is a pic of the venue around 10 minutes before the start of Guthrie's concert with the Jon Finn Group. The Guthrie Era has arrived, folks, and it's only getting started...