Jimi Mitchell began playing guitar at age 16 but it was'nt until Jimi was 19 when he started to take guitar seriously after watching a video by Yngwie J. Malmsteen "Live IN Japan". A good friend of Jimi's by the name of Andy Haught from the band "Zeroking" showed Jimi the Yngwie video and Jimi became obsessed with Neoclassical Metal. Many coutless hours were spent from 1994 to the present learning how to play arpeggios, pedal note phrases, Harmonic minor, Natural Minor, Penetonic patterns and crushining Metal riffs. By 2004 Jimi started to write his first instrumental solo LP and it was released to the public in June of 2005. His first demo LP was called "I'm For Real " and it got Jimi some of the attention he had been wanting for years, but it was'nt until late 2006 when Jimi started to write material for his second instrumental masterpiece called "The Intimidator". The original LP was released in August of 2008. Jimi however felt that the album needed more and wanted to give his fans a better sounding album. In the Summer of 2010 Jimi met up with fellow Neoclassical Metal shred guitarist "Matthew Mills". The 2 instantly became good friends and lined up a series of shows and guitar clinics together on the East Coast in the USA. Matthew MIlls offered to remaster Jimi Mitchell's second LP "The Intimidator" and Jimi went for it. The finished product is what you will hear when you get Jimi Mitchell's 11 song LP The Intimidator" JImi did included two rough demos from the writing sessions for the album as bonus tracks. Currently Jimi Mitchell is one of Neoclassical Metal's up and coming guitar players. Giving the world a fresh taste of new Neoclassical Metal inspired by all of his influences ranging from Iron Maiden, Judas Priest, Helloween, Gamma Ray, Yngwie J. Malmsteen, Stratovarius, and many more. Jimi MItchell is currently working on a new album and plans to release it by the end of 2011.

There will be more to come in 2011 and 2012 from Jimi Mitchell. He is currently in the process of recording the demos for his new album titled "Unhinging Time" which will feature some very well known names in the Power Metal and Shred Guitar scene. 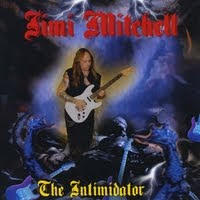