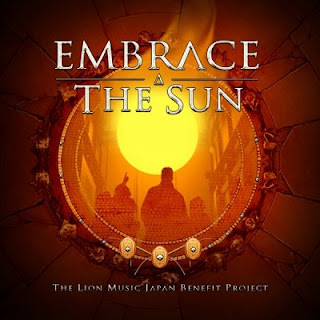 Dedicated to the victims of the Tsunami and Earthquake that struck Japan in March 2011. All artists and composers as well the record label and publishing company are donating their profits from the material included to the victims in hope of a better world. All profits will be donated to the Japan Red Cross.

We thank all involved for taking the time to give a little back to those that have lost so much in the aftermath of devastation in Japan. The response was simply overwhelming and we are proud to present this double CD 28 track album featuring many of the most popular acts on the Lion Music roster, along with some extra special guests.

The album also showcases some home-grown Japanese talent in new label signing, progressive rockers Early Cross, whilst the direct influence of the aftermath in Japan can be heard on Jennifer Batten’s track ‘Sakura Season’ was written after her visit to the country in April 2011.

Elsewhere the album is full of excellent new tracks that run the gamut from heavy and powerful to tender and emotional across a number of rock and metal styles.

Millions have been affected by the tsunami following the massive earthquake off the coast of Japan and all artists involved and all staff at Lion Music hope that the revenue generated from this release will hopefully make some difference to those affected who look to ‘Embrace The Future’.﻿
Milan Polak Ron Thal