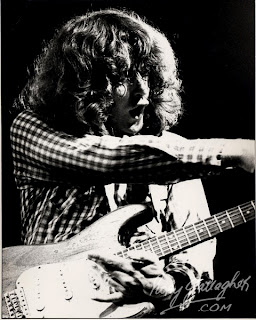 LOST RORY GALLAGHER STUDIO ALBUM FROM 1978 TO FINALLY BE RELEASED!

~Two-Disc Set, Notes From San Francisco, To Land May 17 Via Eagle Rock Entertainment ~

The story goes that Jimi Hendrix was once asked what it was like to be the greatest guitarist in the world, to which he replied, “I don’t know, go ask Rory Gallagher!”

Rory Gallagher (1948-1995) is simply one of the all-time guitar greats. Slash, The Edge, Brian May, Johnny Marr, Janick Gers, Ritchie Blackmore, Glenn Tipton and Vivian Campbell have all said it. Since practically inventing the Power Trio format in Taste (both Cream and Taste debuted in 1966), Gallagher’s music has stood the test of time and he’s as popular now as he ever was, his influence gargantuan.

The story of Rory’s lost San Francisco album actually starts in Japan. In November 1977, after a grueling six-month world tour, the band flew straight from their last show in Japan to San Francisco to begin working on a new album with famed American producer Elliot Mazer (who worked on Neil Young’s Harvest, Big Brother & The Holding Company’s Cheap Thrills and The Band’s The Last Waltz). Mazer recalls the sessions grew “tense,” as Gallagher thought the mixing process “too complicated.” By the end of January 1978, he had shelved the whole record and broke up his band of the past five years.

Fast forward to 2011 when Rory’s brother/manager Donal allowed his son Daniel to recover the album from the Gallagher archive and begin the process of mixing it with his engineer. Rory said in 1992 he hoped the album would surface one day but only if it were remixed. Bingo. Hearing this historic never-before-issued studio album from a key period of Gallagher’s career (the album that would have been released between Calling Card and Photo Finish) is the Holy Grail for Rory’s fans.

CD #2 is another fabulous discovery: a blistering live album taken from four December nights in 1979 at San Francisco’s The Old Waldorf. In the audience Van Morrison, on stage Rory Gallagher (guitar/vocals), Gerry McAvoy (bass) and Ted McKenna (drums). Daniel Gallagher chose to add the live side to highlight why Rory chose to shelve the studio album and reduce his band back down to a three-piece. Rory, after seeing The Sex Pistols at Winterland during final mixes for his own album, was struck by the stark drama and blunt primitivism of pure punk. “It was as close to Eddie Cochran as you’re going to get,'' he enthused. He had been saying that he wanted to get back to what he called “meat’n’potato rock’n’roll,” a stripped-back primal raw immediacy hearkening back to his Taste days.

A street has been named after him in Paris; a corner in Dublin; a statue in his Ballyshannon birthplace, where The International Rory Gallagher Tribute Festival is held. There’s a Rory Gallagher Place and Rory Gallagher Music Library in Cork. Annual tributes are held in Germany and Japan. The man has sold in excess of 20 million albums. Notes From San Francisco [MSRP $17.98] will be a worthy addition to his canon. 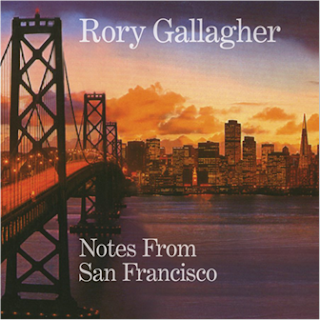