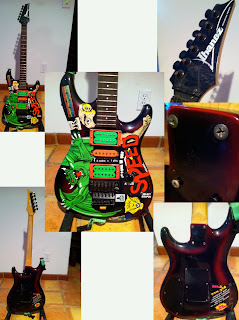 Ibanez Guitar Used on 1st cd http://richiekotzen.com/store-2/personal-items-for-sale/
This is the Ibanez guitar Richie played on his first cd. 90% of the solos were played on this guitar. Comes with Hard Case. Strap and Tremelo arm are missing. Also, Back neck plate is missing as you can see in the photograph.
Available Qty: 1
Price: $6500.00