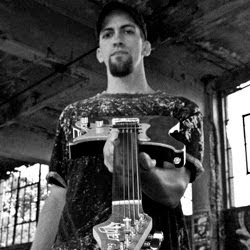 Brian Larkin Full tracks from Far Enough Into the Void plus a special announcement...

1) I'm happy to finally share a few tracks from the album I've been working on! Far Enough Into the Void will be available later this year... http://www.brianlarkin.net/music to listen! My good friend and Dark Empire bandmate Matt Moliti contributed guest vocals to "Disembodied Profanity" (guess where), and the acoustic guitar solo on "Itch" was contributed by another good friend, Eugene Micofsky.

You'll find me at the Vigier booth.

I'm thrilled beyond words and extremely proud to be endorsing Vigier guitars! Quite simply put, they're the best guitars I've ever played, and I've been a fan since I first played a few at a lesson with Ron "Bumblefoot" Thal nearly 10 years ago. I'm on cloud 9, and I know my new urban blue Excalibur Original will be my main 6-string for many years to come. Patrice is a true innovator and Vigier continues to produce the finest guitars in the world.

More news soon... It's quite possible I still have at least one very exciting announcement in store...