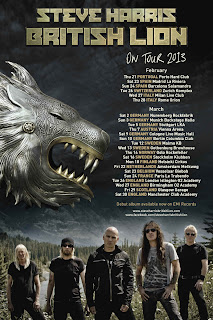 Steve Harris will be taking his new solo/side project British Lion out on the road next month visiting fourteen countries and twenty four cities across Europe, starting in Portugal on Feb 21. For the first time ever, and as a major surprise to many, Iron Maiden’s bass player, founder member and leader will be taking temporary leave from his Maiden activities and heading out on a full European Club tour. (full schedule and details below). British Lion is Steve’s debut CD outside Iron Maiden and was released by EMI in September 2012. Featured alongside Steve are Richard Taylor on vocals, David Hawkins on guitar and keys, Grahame Leslie on guitar, and Simon Dawson on drums. The 10 track album was mixed by Kevin Shirley [Maiden’s longstanding producer] and has been pronounced both “brilliant” and “a big hearted ferocious triumph” by the music press who also commented that although it’s stamped with Steve’s inimitable style, it’s also very different to Maiden, so fans will be in for a whole new experience seeing and hearing these new songs played live.