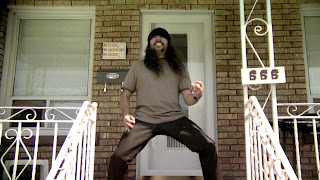 In an air guitar war there are only LOSERS!

Two neighbors, one a quiet, would be folk guitarist, the other a brash wannabe headbanger, vie for air guitar supremacy in a take no prisoner battle in a sleepy suburban neighbourhood.

When it came time to write and direct my next film I wanted to combine my two loves. Filmmaking and guitar. What bothers me about air guitar movies and videos is the fact that their hand movements represent how they feel, not how the riff is played. I aimed to change that with Air Knob.

It took me a few months to work out the story and to pre-record the music and since I was playing the guitar parts in the recording sessions it became clear to me that I should play both guitar players. I have always loved acting but do not consider myself an actor. This gave me an opportunity to get that out of my system.

Tim Dashwood is an accomplished cinematographer and luckily, a friend, who showed up on one lazy day in May in East Hamilton Ontario Canada. This was also a chance for him to put his HD200, HZ-CA13U and a Russian Kinor 10-100 zoom to use.

It took about one month to complete the edit and by August of 2009, it was picked up by OUAT MEDIA for distribution which sold it to Movieola, Movie Central, Sundance Channel Canada, Air Canada and a few more. In addition to broadcast Air Knob enjoyed a 2:1 selection ration on the festival circuit including the Worldwide Short Film Festival, Hawaii International Film Festival, Park City Film Music Festival and won awards at many more.

In 2012 the rights came back to me and having never ben online, I decide to release the movie on 12/12/12. If you are reading this before seeing the film, you'll get the joke when you see the "spinning sign"

I really hope you enjoy this film. It has been a fun journey and it continues on the internet.