on January 08, 2013
TOTO’s premiere guitarist Steve Lukather will release his seventh solo album “Transition” on Monday 21st January. The new single “Right The Wrong” is released on the same day. Critically acclaimed as one of rock’s most sought after guitarists, Lukather will embark on a European tour in March, which includes concerts at the London Islington o2 Academy (March 29) and the Bilston Robin 2 (March 30). “Transition” will be released in three formats including limited deluxe edition CD, jewel case CD, and vinyl. Pre-order the album and merchandise http://stevelukather.mlgmerch.com/ 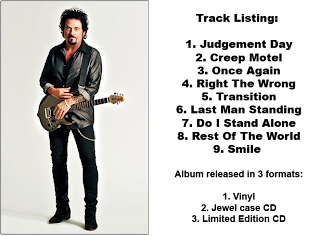 One of the original founding members of the multi-million selling rock band TOTO, Lukather’s new album showcases extraordinary guitar playing performed across some of the most heartfelt songs of Steve’s career. “Transition is a turning point for the album and a turning point for me,” Lukather explains. “As we were writing the songs, I was thinking about everything I’ve seen — all the people I’ve lost in my life, the great and the difficult experiences I’ve had, and how ultimately it was time to get it together and embrace things for what they are.”

In addition to his work with TOTO, Lukather is a 5-time Grammy winner who has played on 2000+ albums with some of the biggest stars and legends in music including Elton John, Paul McCartney, Roger Waters, Miles Davis, Alice Cooper, George Benson and Rod Stewart. He also played guitar on Michael Jackson’s multi-million selling milestone album ‘Thriller’, is a member of Ringo Starr's All-Starr Band (2012-2013), and has toured with Joe Satriani, Steve Vai and John Petrucci in G3 2012.