Chuck Loeb: Dead at 61 Guitarist and Composer passes away. RIP 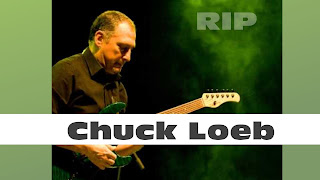 Chuck Loeb, Guitarist and Composer, Dies at 61: Versatile guitarist, composer and producer worked with Stan Getz, Steps Ahead, Fourplay and others

Loeb began a solo career in 1988 with his debut album My Shining Hour on the Japanese record label Pony Canyon. He released subsequent albums on DMP Digital Music Products until receiving commercial success with Shanachie Records on The Music Inside (1996). The title song from the album held the number one position on the jazz charts for six weeks. Later, he produced Moon, the Stars, & the Setting Sun (1998), Listen(1999) In a Heartbeat (2001), and All There Is (2002).

Loeb's music has appeared on TV shows, commercials,[3] and movie soundtracks, including The Untouchables, You've Got Mail, and Hitch.
Details of his life and career: https://en.wikipedia.org/wiki/Chuck_Loeb