Rick Renstrom: the fire within

Rob Rock - In The Night


Background:
Rick Renstrom started playing guitar at the age of fifteen, after seeing Yngwie Malmsteen on a TV special. When he was sixteen, he attended the University of Akron majoring in music. Rick studied classical guitar, jazz guitar, theory, composition and overall musicianship.

Rick has won the "Best Lead Guitarist" at the 1996 CFMA Awards, 1998 won the M.A.R.S. Guitar challenge and 2001 recieved "Best Metal Guitarist" at the Orlando Metal Awards. As a result Rick has signed with Mascot Records for all of Europe. 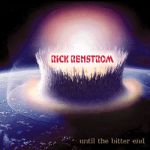