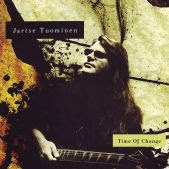 
Background:
Jartse Tuominen has been playing guitar for over 30 years. What started as a boyish passion turned in a lifetime expression of artistry and talent.

In the early 80's his heavy-metal band Outburst gained fans even in Italy and Spain, and became quite popular among young people in Finland. The next step that Jartse took with his boots was Takala Project, who's unique progressive jazz music was composed exclusively by Jartse himself. Unplugged and acoustic gigs with the Travel Bros. Numerous studio sessios ngained him respect among professionals and commercial TV-shows among the public.