Jeremy Krull: the man in the engine room

on March 30, 2009
News:
30-03-2009:
I caught up with Jeremy Krull on facebook IM. He's been very busy since he graduated Berklee College of Music in May of 2008. Currently based in New York, he's set up a freelance production company called Strategic Sonics. As a result he's been at the helm for a number of music projects including Hiss Of Atrocities, Dark Empire. I addition he's also been working as a session musician writing and playing for people such as the Magna Carta label. 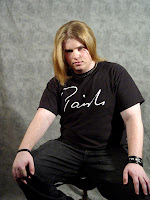 Those who anxiously await music will have to wait a little longer as Jeremy says:

"I'm still writing music, but right now I'm having a lot of fun working in the studio for other folks... I've been writing new material, much more fusion/world/progressive based, and it'll probably feature a lot of lazy legato playing, and abuse of my Surfreter!"

. As a result of his top studio work he's also picked up some endorsements along the way, including support from Vigier Guitars, Maxon FX/Godlyke, Toontrack.