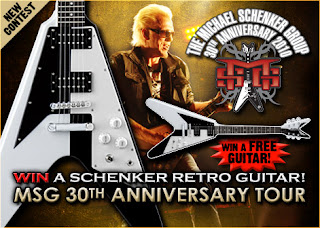 MSG's 30th Anniversary World Tour 2010 is accompanied by some of the Worlds greatest musicians. Drummers such as Carmine Appice have been the World's greatest drummers in Rock History. Along with bass player (and Dean Guitars Owner) Elliott "Dean" Rubinson, who is a fantastic addtition to the US line up, MSG has several other great players such as Rev Jones who joined MSG as long ago as 2001 is definitely one of the Worlds most unique new bassists around. He even plays with Michael's Guitar Hero Leslie West. And of course there is Wayne Findlay who has been with MSG since 1999. A very talented and fun rocker.

HOW DO YOU ENTER? Visit http://www.deanguitars.com/msg10.php and simply enter your email address before August 31st! No purchase necessary. Winner selected September 7th.