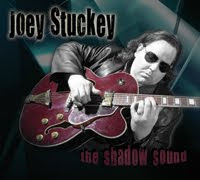 12/6/2011 – Macon, GA – Truly one of the hardest working people in the music industry, 2011 has been a landmark year for blind recording artist, engineer, producer and inspirational speaker Joey Stuckey. With the release of his latest acclaimed CD 'The Shadow Sound' in February of this year, Stuckey has been hitting the road performing and speaking all over the country – October alone saw Stuckey in Hawaii, Los Angeles and Nashville. However, October was a landmark month because Joey was honored by a non-profit organization in his hometown of Macon, Georgia where he serves as the official music ambassador. The organization “New Town Macon”, a non-profit tasked with revitalizing the downtown area of Macon, presented Joey with a special recognition award for his contribution to his community. Joey has been instrumental in shaping Macon's musical landscape. Stuckey was also recognized for his active role in preparing for Macon's future.

“I'm honored to be recognized for my efforts in promoting the music and history of Macon,” says Stuckey. “I look forward to being of service to my community for the rest of my life. I feel like this area, and Macon in particular, has as much musical talent as New York City or Los Angeles. We just have to find a way to make sure the rest of the world knows about it and come together as a community to ensure our musical economy continues to prosper!”

Stuckey's father accepted the award on Joey's behalf, from Greg Dent, a New Town Macon board member. Dent presented the award and said: “As Macon's first official 'Ambassador of Music', Joey is a tireless and enthusiastic promoter of downtown, whose life work advances the city's musical legacy. Joey's business, Shadow Sound Studio on Third Street, brings musicians from around the globe to downtown Macon to record. Several of (Joey's) own recordings have been nominated for Grammys. Joey is a band leader, educator, and promoter of civic activities who leads with a powerful and generous spirit. He has donated his time and talent to area schools and local organizations and recently provided a young boy in hospice care with his wish of recording in Joey's studio. Anyone who knows Joey Stuckey knows that his enthusiasm and love of Macon never waivers.”

While October was a busy month with many exciting and amazing events for Stuckey, November has also been busy

and a month of growth. First, Joey welcomes two new endorsers to the family. To enhance his studio and live performances and take his music production ability to the 23rd century, Joey has partnered with Misa Digital makers of the “Kitara”. “The Kitara is one of the most remarkable instruments to come out since the advent of the electric guitar,” says Stuckey.

To add even more reasons to come out to one of Joey's live performances, Joey has partnered with Kazoobie Kazoos. “As the official ambassador of music for Macon, Georgia – the birthplace of the kazoo – I am thrilled to partner with Kazoobie Kazoos to provide a limited number of souvenir kazoos to be given away and used during the audience participation parts of my concerts and inspirational talks,” says Joey. “I am excited that my fans will have this unique souvenir and fun musical instrument which truly allows us to share the gift of music! As a blind musician, sound is the only thing that I care about and Kazoobie Kazoos are unparalleled in their tonality and quality construction.” For more information or to acquire your own Kazoobie Kazoo go to www.kazoos.com

Stuckey's studio records theme song for Talent Watch Radio: “We are proud to be working with Talent Watch, the fastest growing source for new talent discovery on the internet! It's like 'American Idol' but better – and a great way for talent bookers, record labels, management firms and artists to connect.” Joey Stuckey, recording engineer, producer and owner of Shadow Sound Studio, was hired to compose and record the Talent Watch theme song being used to audio brand the Talent Watch radio show. Joey was also used to produce the most current episode of the radio show http://soundcloud.com/talent watch/talent watch-radio-show and train the staff of Talent Watch on producing future episodes of said show. Stuckey also has his voice heard in the intro of the show and the various promos for the show, both video and audio and throughout the program between songs branding the show.

Says Hugh Hession, Talent Watch radio host and partner of TalentWatch.net, “Talent Watch Radio decided to record and produce our latest show at Shadow Sound Studio with owner Joey Stuckey. We chose Shadow Sound because of Joey's reputation of being a results-oriented engineer and producer. He understood our vision and was able to transform that into the caliber of show we desired. Talent Watch highly recommends Joey to anyone who wishes to up their game.” To check out Talent Watch and what it has to offer to both artists and industry pros alike visit: www.talentwatch.net

Joey Stuckey The Thrill Is Gone