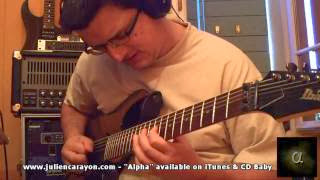 This my second song I ever written for the 7 string guitar. (the first one is titled "IV", yes another lengthy song! lol Most tracks feature my 7 string guitar, however some parts of that song were recorded using my faithful 6 string Ibanez guitar because she has the right tone for these parts, not to mention I didn't bother to grab my 7 string as well (yes guitar player can be lazy lol).


"VI" is part of my album "Alpha" I released a couple of years ago. I think it is time to unveil it via YouTube. It is pretty dark sounding obviously, but it is not the darkest and sadest song I have written so far. Each video sequence reflects the actual guitar track being recorded for the final song. Enjoy :)