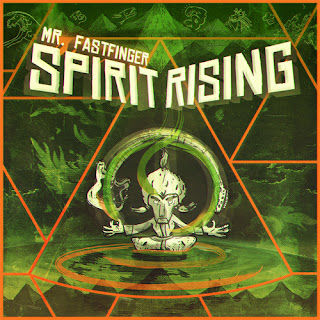 Legenday GuitarShredShow.com was released in 2005 and everything started with big bang in 2005. This year we are celebrating it all by releasing Mr. Fastfinger's new instrumental album "Spirit Rising".

Pre-Order and help us get the music released!

1. Pre-Order starts 28th of may.
2. Pre-Order ends 15th of june.
3. Pre-Orderers will get the album on 27th of july (CD delievery is an estimate. a download link will be given for starters)
4. Offical release of the album 5th of august 2015.


SPIRIT RISING IS THE MOUNTAIN TOP

“Spirit Rising” continues the musical saga of Mr. Fastfinger. Groovy and melodic instrumental rock with emotional landscapes. Wild guitars are all over the picture it’s all for the sake expression and the power of music. The music exploring the ways of instrumental music mixes various elements and styles of rock, pop, metal, world, and film music. The erupting stereo sounds will take you on a vivid journey.

Produced and Composed by Mika Tyyskä.

THE UPCOMING MOVIE
Coming Attractions: The Spirit of the Guitar Hunt

The album was produced together with another project. a 30 minute long movie which was made together with the master guitar maker, Juha Ruokangas (Ruokangas Guitars). The movie mixing cartoon and live action tells the story of Mr. Fastfinger's new guitar. Most of the music in this album was composed for the movie. Movie premieres 26th of August 2015.

AND WHERE THE MONEY GOES?

You're not only buying the music. You're supporting my work. Pre-odering will help me to put this album out as it deserves to. This musical project has been going on since august 2012. By taking part in the pre-order you'll help me finance the mastering and the CD dublication costs. You will also me to be able to focus on the release and work on the nessecary marketing material such as editing together making of -material and produce play through videos of as many tunes as possible!

ABOUT MIKA AND MR. FASTFINGER

“Mika Tyyskä is one of the most talented people that I know. He is a phenomenal guitar player as well as an accomplished graphic animator… If you have never checked out his work, you will be thanking me soon because this man is a one-of-a-kind and everyone should know about the creative light that shines from his inner being”-Jordan Rudess

More about Mika and Mr. Fastfinger

LET THE WORLD KNOW!
To further help this mission, please do let everyone know about the pre-sales.