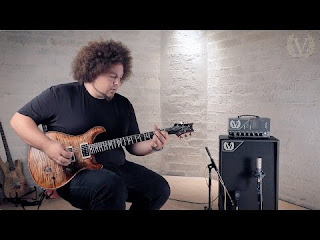 Welcome to the official video for the Victory Amplification VX The Kraken 50-watt head.

Sharing the same compact chassis as our award-winning V30 and V40 heads, VX The Kraken is a dual gain mode, dual master volume, all-valve amp designed for metal, progressive and extended range players. And did somebody say djent?

Rabea was kind enough to lend his ears and experience to the R&D of VX The Kraken - the results are immense.

Rabea demonstrates each of the gain modes and the bass focus feature, before moving on to explain how he uses two Kraken heads and two Victory V212VV cabinets to create his massive, stereo tones.

The effects used include a Strymon BigSky reverb, TimeLine delay and a Buffalo FX Germanium Fuzz. All amp and effects switching is handled by TheGigRig G2.

For more details on the Victory VX The Kraken and to find your nearest stockist, please go to www.victoryamps.co.uk