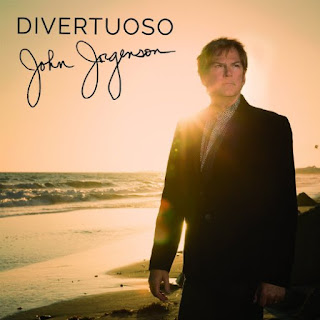 Jorgenson's career has been wide-ranging, including playing lead guitar in Elton John's band for seven years; being a co-founder of both the groundbreaking The Hellecasters and The Desert Rose Band; being widely known as the U.S. Ambassador of Gypsy Jazz; and portraying Django Reinhardt in the Hollywood feature film Head In The Clouds. Jorgenson has recorded or toured with the likes of Bonnie Raitt, Luciano Pavarotti, Bob Dylan, Roy Orbison, The Byrds, Johnny Cash, Bob Seger, Willie Nelson and many others. Jorgenson is a GRAMMY Award-winner and has won many other awards, including being three-time Academy of Country Music (ACM) Guitarist of the Year.

Totaling 40 tracks in all, Divertuoso showcases Jorgenson's incredible virtuosity as both a musician and songwriter in a variety of styles. Considered a master of the electric and acoustic guitar, and many other instruments, Jorgenson plays 12 instruments on the box set (acoustic guitar, electric guitar, mandolin, bouzouki, clarinet, mandocello, soprano sax, bass, hammond organ, bassoon, keyboards, percussion), as well as vocals, and he composed a majority of the material. This release is a singular accomplishment not only for Jorgenson, but also for the guitar community as a whole. His mastery of these three disparate styles (gypsy jazz, bluegrass and rock) is on full display throughout these recordings.

“I feel like a huge overview of my musical life is contained in this project,” Jorgenson said. “It incorporates many of the diverse styles that all co-exist in my world. Had I thought very long beforehand, I could have easily gotten overwhelmed at the amount of actual work it would take to create such a large body of work, but it really came together pretty naturally. I'm both relieved and proud to have Divertuoso out in the world.”

Returning is the latest recording by gypsy jazz veterans the John Jorgenson Quintet. Their music, both live and recorded, is a time-and-space transcending experience. All but two of the album's 13 tracks were written by Jorgenson himself. Jorgenson plays acoustic guitar, bouzouki, clarinet, mandolin, mandocello, and soprano sax on the record, and sings on one song. The New York Times has been quoted as saying: “Jorgenson is perhaps the best jazz guitarist alive.”

The 15-track From The Crow's Nest by bluegrass supergroup J2B2 (John Jorgenson Bluegrass Band featuring Herb Pedersen, Jon Randall & Mark Fain) was recorded at Sheryl Crow's home barn studio in Nashville over the course of three days. Pedersen (The Dillards and Old And In The Way) is a legendary vocal arranger and musician who also co-founded The Desert Rose Band with Jorgenson. Hit songwriter Randall, a former member of Emmylou Harris' Nash Ramblers, has toured with Earl Scruggs and Sam Bush. Fain is the long-time bassist for Ricky Skaggs & Kentucky Thunder. The record includes lead and harmony vocals by Jorgenson, Randall and Pedersen, and when the three sing together, a magical 60's/70's folk air transforms the typical bluegrass “high lonesome harmonies” into an entirely different dimension. In addition to his vocal work, Jorgenson plays mandolin and acoustic guitar. Songwriters contributing to the record include Jorgenson, Pedersen, Randall (co-writer of the CMA Song of the Year, “Whiskey Lullaby,” with Bill Anderson, included in this set), Rodney Crowell, Guy Clark, JD Souther, Mitchell Jayne and Rodney Dillard (members of The Dillards) and Rock and Roll Hall of Fame Member Chris Hillman (The Byrds, The Flying Burrito Brothers).

The third album, Gifts From The Flood, is a John Jorgenson solo electric record. Jorgenson plays everything on it (guitars, bass, Hammond organ, clarinet, bassoon, keyboards, and percussion) with the exception of drums, which are played by Greg Morrow. The concept is an interesting one; Jorgenson had many guitars and amps completely ruined in the Nashville flood of 2010. As the guitars were restored and each one came back to him, new songs seemed to flow out of each one. The gratitude Jorgenson had just for having them back is captured on this record. Each song was named simply after the guitar that was used to create it, and all of the songs were written by Jorgenson alone. With everything from straight-ahead rock, to country-flavored picking (including a special guest appearance by Brad Paisley on one track), to cool surf-flavored grooves, Gifts From The Flood is anything but standard.

Here's what others have said about John Jorgenson:

“John Jorgenson is one of my most favorite players. He is incredibly versatile and his solos are unique and melodic, played with amazing technique. 'My' guitarist's guitarist.” - PETER FRAMPTON

“If there was one guitar player I'd like to be, it would be John Jorgenson.” - BRAD PAISLEY

“This is a display of virtuosity rarely rendered.” - FRETBOARD JOURNAL

“John Jorgenson has a rare kind of genius for an instrumentalist in that he's equally comfortable and capable of playing Buck Owens, Beatles riffs, or jazz leads…” - NO DEPRESSION

Track Listing:
DISC 1: John Jorgenson Quintet - Returning
1. Sonora Spring
2. Sand Away The Years
3. San Sebastien
4. Waiting For The Fog To Rise
5. Born Too Late
6. It Only Takes A Secret
7. Istiqbal Gathering
8. If I Only Knew You Cared
9. Black Swan
10. I've Got My Fingers Crossed
11. Inches And Feet
12. Wistfully Waltzing
13. Sonora Spring (Reprise)