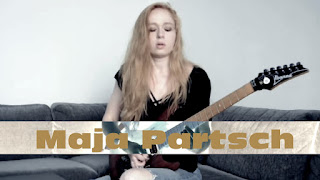 As you might have noticed, I made this composition and put it out a couple of months ago. Then I figured, that it would be quite nice to have a video playthrough, and so I had some help filming it with my SLR camera at my boyfriends apartment. Credits to Rufus Larsen for doing the filming!! While making the playthrough, I felt like making some changes to the chorus chords, using 7-string in stead of 6, with some changes to the progression and harmonies, which - in my opinion - made it more interesting. This consequently meant that I had to play some new bass in the chorus and while I was at it, I made some slight changes to the bridge as well. For my first edition, I had Jamie De La Sencerie playing bass for the entire song, but for now, Jamie is your bass-player in the verses, and I am grateful for that - so credits to Jamie!

The guitar that I'm using for my leads is an Ibanez S, as seen in the video / the one with the scar - quite a rare model actually, with a DiMarzio D Activator pickup in the bridge position. The rhythm guitar is a 7-string Ibanez prestige with a bareknuckle pickup in the bridge position. I plugged guitars into logic through my sound-card, and then I've been using some amp simulation and eq there. For the drums I've used superior drummer - wrote the drums in midi, and had the midi-instrument simulate an actual drummer - since I am not lucky enough to be in the possession of a real drummer. The Piano is played with 'Ivory' virtual piano by synthology. It's played through a midi-piano called studio logic - quite amazing for studio purposes. The once occurring synth - in the bridge - is also played with the Ivory virtual piano by studio logic.

The mix is done by me, thus not professionally, which I hope to be rich enough to do someday, however I used an exceptional general eq-guide by Björgvin Benediktsson, that I would highly recommend to anyone just getting into the confusing field of mixing.

I hope you enjoyed it! Stay tuned!