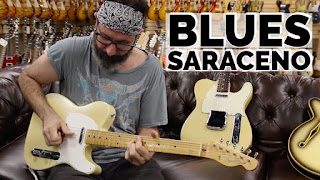 It's #TeleTuesday!!! Norm sits on the couch with the talented Blues Saraceno, whos a guitarist, composer and music producer. You can catch his music everywhere! Blues is playing a 1959 Fender Telecaster Toploader here at #NormansRareGuitars! What do you guys think?