After writing and recording sixteen solo albums — and contributing some immense guitar skills to countless other projects over the course of three decades — one could potentially find themselves a little lacking for inspiration or fresh ideas. That is not the story of Joe Satriani. With his latest release 'Shapeshifting,' (out now, via Sony/Legacy Recordings) Satch is back with a sonically spellbinding new album that ushers in a new era of Satriani musical mastery. Guitar Interactive Magazine editor Jonathan Graham sits down with the instrumental guitar pioneer to discuss the writing and recording of the latest record, almost being electrocuted on a video shoot, plus some surprising fan theories on hidden messages within his music. 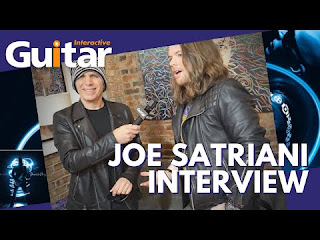 The European leg of “The Shapeshifting Tour” (which was set to begin on April 15, 2020) has now been rescheduled for April 2021.

To find out more about Joe Satriani's brand new album and the 2021 tour, visit: www.joesatriani.com

Subscribe to our channel for more from Guitar Interactive TV plus all the latest news and reviews from the magazine.

Check out this month's free Issue at http://www.iguitarmag.com/