Guitar snake has a new CD for release, which features Victor Lafuente. 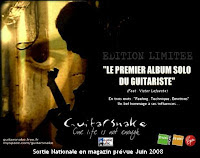 Background:
Nicolas Notarianni was born in France. He is currently known as "Guitarsnake". He plays Guitars, Bass, Keyboards and Drums.