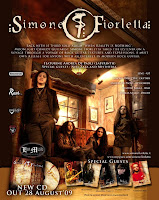 "W.R.I.N." First Review on METALLIFE.COM: You can read the first review of my new soloist album "When Reality Is Nothing" on www.metallife.com

In summary, this CD will appeal to fans of guitar work, instrumentals and emotive rock music. Well worth checking out for a nice deviation from the average and mundane.

August 28th 2009 marks the release of the third Simone Fiorletta solo album entitled "When Reality Is Nothing". With the album Simone takes the listener on a voyage through a myriad of rock guitar textures and expressions. A must own release for anyone with an interest in modern rock guitar.

More information on the album and a sample track can be found at www.lionmusic.com/cd/realityisnothing.htm

THE ALBUM WILL BE RELEASED NEXT AUGUST 28
Simone Fiorletta