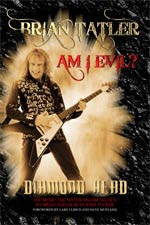 
It's hard to actually overstate the importance of Diamond Head in the world of heavy metal - not only were they early progenitors of thrash but they influenced hundreds of bands in the UK and the US, including the mighty Metallica.

As well as being one of the nicest men in rock, Brian Tatler has a tale or two to tell and, along with his co-writer John Tucker (who also co-wrote Biff Byford's autobiography and was responsible for the awesome Suzie Smiled: The New Wave Of British Heavy Metal), the stories are thick and fast.

Forever tipped as the next big thing, Diamond Head have opened for Iron Maiden, AC/DC and Metallica, and toured with Black Sabbath, Megadeth and Thin Lizzy. Yet they were beset by management difficulties, poor decisions, bad deals, nightmare producers, band splits, ego problems… And when they finally signed to a major label it was the wrong one. But amongst all that, their legacy is enormous and their music timeless, with their classic signature tune 'Am I Evil?' appearing on Metallica's 2009 'Guitar Hero' game.

Brian will be appearing on Planet Rock on Tuesday night in Nicky Horne's show to talk about the book (tune in from 6pm), and for this week we are giving you the chance to win a copy

Simply enter your details into the form