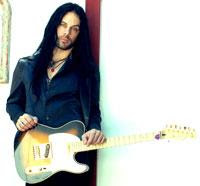 
On Thursday, April 15, the Guitar Program at Musicians Institute (GIT) welcomes a concert-clinic appearance by guitarist-singer-solo artist Richie Kotzen. With a gritty, hard-rock-meets-soul sound, the LA-based guitar-slinger has achieved international renown with more than a dozen solo album releases, festival performances, eight appearances on the cover of Japan’s Young Guitar magazine, and stints as lead guitarist for such major bands as Mr. Big and Poison.

During this exclusive clinic, Richie will take questions from students about everything from guitar playing to the challenges of launching a successful music career. He and his band will also perform songs from various stages of his career including his latest release, Peace Sign (autographed copies will be available for purchase).