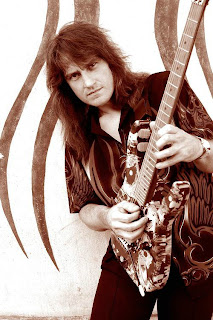 September 27, 2010 - Acclaimed San Antonio, TX-based guitarist/composer Ron Jarzombek(WATCHTOWER, BLOTTED SCIENCE, SPASTIC INK) has issued the following update.
"Basically, what's going on is I have quite a few things in the works right now, but haven’t completed much of anything since the BLOTTED SCIENCE ‘The Machinations Of Dementia’ CD in late ’07 (well, I released ‘PHHHP! Plus’ last year but that was previously recorded material). This is what I get for starting up too many things, trying to run everything, handle nearly all production work, and I get so overloaded that I lose focus on what I should be working on, what is priority at the time, and nothing gets completed. Hopefully, one of the projects listed below will actually be completed sometime soon, but don’t hold your breath or you will die.
"I have not touched the DVD material since I posted the 'Oscillation Cycles' video over a year ago. I had so many people asking what the DVDs would be like, so I completed that segment and posted it just to give fans a glimpse of what I’m putting together, but knew that after that I would be getting back with WATCHTOWER in hopes of finishing up 'Mathematics.' There will be 3 instructional DVDs, the 1st based on common scale use and abuse, the 2nd on timing, and the 3rd on 12 tone uses. I’ve got tons of work done on all 3 DVDs, but am far from being completed on any of them. They will be completed and released when they are done. How’s that? Believe me folks, I REALLY want to get back to my DVDs, but I usually put bands/projects first when other band/project members are co-operating.
"Seems like whenever WATCHTOWER try to complete 'Mathematics', we hit a snag, roadblock, or wall. We’ve re-worked the material for the third time now (2000, 2004, and now 2010), and I’m just tired of talking about it. It’s REALLY getting old. You guys can keep asking me, but the answer will be the same... I really don’t know when the CD will be done. I really don’t. We need to get the damn thing done sometime, somehow, some way. But we have over an hour of good material sitting around waiting to be recorded and released. If we can just get this vocalist situation worked out, we should be fine. In April 2010 we digitally released ‘The Size Of Matter’ and played the Keep It True Festival in Germany and I thought at that point we would for sure get back on track and get the recordings done (just like I did in 2000 and 2004). So we’ll just have to wait and see what happens.
"When we got together for the Tampa rehearsals in mid ’08, we began talking about plans for a second BLOTTED SCIENCE CD and came up with a wacky concept. Let’s just say there were LOTS of crazy and interesting ideas floating around. The ‘Laser Lobotomy’ and ‘Oscillation Cycles’ rehearsal videos were posted and talks of gigging were in the air, but nothing materialized. No writing for the second CD really happened after that. Alex continued working heavily withCANNIBAL CORPSE, Charlie with BEHOLD... THE ARCTOPUS, and I was working on the DVDs/WATCHTOWER. We just kept in contact and were thinking of how we could pull off this concept'. After a year and a half of focusing on WatchTower, and it coming to a grinding halt, I REALLY wanted to get moving on something. I was getting hounded by fans about a secondBLOTTED SCIENCE CD, so I began putting things together for Blotted Science II. Realizing that a full CD would take too long to complete, we decided that an EP would be our best and most realistic move at this point. Alex is heavily involved with CANNIBAL CORPSE and our new drummer Hannes Grossmann is writing/recording/touring with OBSCURA. New drummer?! What?!! Yes, folks, please welcome Hannes to BLOTTED SCIENCE! Those of you in the death metal world should be very familiar with his work with NECROPHAGIST and OBSCURA. Of course, Alex and I wish Charlie the very best with his current bands/projects/sessions, and many thanks for doing an absolute brilliant job on 'Machinations.' The EP will consists of 4 songs totaling 22 minutes (3 of which are already written), and will be hopefully released in early ’11. But again, but don’t hold your breath.
"While WATCHTOWER was in Germany playing the KIT Festival, we stayed over a few days and I got to hang out a bit with Hannes and Chris from OBSCURA. Chris and I soon starting talking about music theory, 12 tone uses, and thought that it would be cool for us to put something together, maybe just a song or two, and have it available digitally. To fill out the recording lineup we fired upHannes, and I asked my SPASTIC INK bandmate bassist Pete Perez if he was interested, so we all pitched in with a few tunes each, and came up with a 6 ½ minute song. We haven’t come up with a name for the project yet, but the name of the song will be ’Duodecimal Levorotation’."
Ron Jarzombek online:
www.ronjarzombek.com