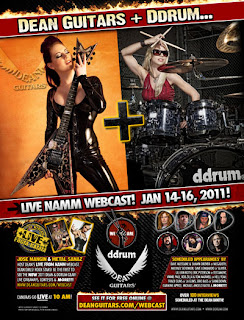 Dean Guitars is the first, and to-date, only NAMM exhibitor to give end-users around the world an all-access ticket to all of the NAMM floor action with their multi-camera, real-time HD webcast. This year is no exception as Dean will unveil it's top of the line 2011 instruments while presenting an impressive schedule of artist signings, exclusive interviews, instrument spotlights, live contests, giveaways and more. Artists scheduled for signings and interviews in the one-stop combined Dean Guitars + ddrum booth include:

DON'T MISS DEAN'S NAMM WEBCAST....SAVE THE DATE!!
Over 100,000 viewers tuned in live to see the Dean Guitars "Live from NAMM" Webcast that will once again be hosted by Metal Sanaz and Sirius XM on-air personality Jose Mangin."Dean Guitars live from NAMM "webcast is powered by NewTek TriCaster.

HELLYEAH, MICHAEL SCHENKER, LESLIE WEST, MICHAEL BATIO and the COFFIN CASE FASHION SHOW TOP OFF THE BIGGEST PARTY IN THE HISTORY OF NAMM!

Dean Guitars and their closest friends will celebrate their 34th anniversary as a guitar industry leader with a massive party on Friday, Jan 14th at the beautiful Grove of Anaheim.
The 2nd Annual Dean Guitars NAMM JAM will be headlined by the mightyMEGADETH, led by Dean's most prolific endorsed artist Dave Mustaine. Megadeth are in the midst of the most successful run of their career and have just been nominated for a Grammy.

The party will open with a star-studded all-star legends jam with some of the greatest guitarists in the business including MICHAEL SCHENKER, LESLIE WEST of Mountain, MICHAEL ANGELO BATIO, (voted World's #1 Shredder by the Guitar Player Magazine Readers Poll) and more.

And if that isn't enough (cuz it's not) the night will be topped of with the always eye-catching Coffin Case/Dean Girl Fashion Show. Popular SiriusXMon-air personality and MTV Headbangers Ball Host, JOSE MANGIN will MC the evening.

The DEAN GUITARS NAMM JAM IS AN INVITATION ONLY EVENT. HOWEVER, THE DEAN TV CREW WILL BE ON-SITE WEBCASTING LIVE FROM THE GROVE FROM 7pm to 11:30PM, Fri. Jan 14th SO FANS AT HOME GET A BACKSTAGE PASS TO ALL THE ACTION!