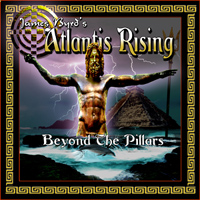 Lion Music are proud to introduce some true musical treasure in the form of this special release from the early days of one of the worlds most accomplished guitarists, James Byrd. A name synonymous with some of the finest guitar work committed to tape, this unique release is an album any fan of the former Fifth Angel guitarist will have been longing to hear and serves as a reminder of just how good a songwriter and musician Byrd is.

Comprised of 14 never before heard performances and 7 new songs, “Beyond The Pillars” is -literally- a lost album. The material's origins date to when James Byrd began writing and recording with vocalist Freddy Krumins within days of departing Fifth Angel in the summer of 1987, with much of the music material Byrd had originally intended for the second Fifth Angel album.

Like Deep Purple's “Smoke on the Water” release, “Beyond The Pillars” was recorded on location. Brain Storm Productions mobile captured the band's magic at the infamous Music Bank sound stages in Seattle Washington from the fall of 1987 through the winter of 1988. Fans of Byrd’s solo debut “James Byrd’s Atlantis Rising” (Shrapnel Records) will recognise 7 of the track titles on offer here. However the versions here showcase a rawer, heavier and more immediate delivery to those that were later re-recorded on the now out of print “Atlantis Rising” release by Shrapnel Records. Further treasures are revealed in 7 never released songs rich in diversity and depth that make this a “must own” part of any Byrd, or indeed Fifth Angel’s fans music collection.

The forgotten masters that make up “Beyond The Pillars” were undiscovered until early 2011 when Freddy Krumins was going through a box of old tapes. Regarding the discovery of the recordings, James Byrd comments, “I was shocked to have had these masters turn up, and then to hear the quality. I had long forgotten the sessions after almost 25 years of other musical activities. Everything sounds better than I could have imagined and I think my playing was on a higher energy level than what later ended up on the J.B.A.R. debut. I knew it needed to be heard”.

On the musicians’ aim almost 25 years ago Byrd recalls, “The goal was to create a musical statement which was melodic and dynamic”. This material's character is further shaped by a lyrical content which blends tales of lost love, with Greek mythology and fantasy all powered by the sublime vocals of Freddy Krumins, himself a student of legendary vocal tutor David Kyle (who also coached the likes of Geoff Tate/Nancy Wilson/Chris Cornell etc).

“Beyond The Pillars” sounds like no other album from an American group before or since. The combination of European influences by groups and musicians such as Scorpions, UFO, Ritchie Blackmore's Rainbow, Uli Jon Roth, and James Byrd's decidedly classical influences, is such that “Beyond The Pillars” captures the energy of a newly formed group ready to take on the world.

From hard driving dark tracks tracks like “Chasing The Shadows”, to power ballads like “I've Got To Find You”, and lush instrumentals such as “Requiem Atlantis”, this album showcases a level of maturity and sophistication seldom heard from any band, let alone a new one from America in 1987. buy