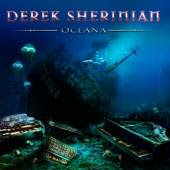 One of the best albums of recent times, classic rock fusion with keyboard maestro Derek Sherinian backed up by an army of some of the finest players on the planet. Derek Sherinian says he would like to play with Jeff Beck, well this album would be proof enough that he's got the songs for Jeff's fine art guitar work to paint over.... enjoy.

Keyboardist Derek Sherinian is a man out of time. Raised in Santa Cruz, California, the young Sherinian began playing piano at the age of five, then came under the spell of the music of Elton John, along with the early influences of The Beatles and Bob Dylan.

While still a junior in high school his musical talent was such that Derek was offered a scholarship to the prestigious Berklee School of Music in Boston, Massachusetts. After three semesters he was introduced to Buddy Miles (Jimi Hendrix's Band Of Gypsys), who was putting together a touring band. After an ultimately impressing audition, he earned his spot.

After leaving Miles, he soon landed a gig with rock legend Alice Cooper. It was during the time with Alice which saw him perform over 250 shows in support of his Trash album, that he was bestowed with the nickname by the legendary shock rocker, 'The Caligula Of The Keyboards.'

After another tour, in 1991 he became offstage keyboardist for hard rockers KISS. However, it was with him joining prog metal superstars Dream Theater that his profile began to rise. More technically challenging musically than anything he had previously been a part of, he was named the band's keyboardist just prior to the tour in support of the album Awake. After spending four years with the band, the relationship ran its course after which he immediately released his first solo record Planet X.

Sherinian has carved out a niche for himself in the progressive metal scene. He has attracted the best players on Earth to his solo album sessions, some of whom include luminaries Al DiMeola, Steve Lukather, Yngwie Malmsteen, Slash, John Petrucci, John Sykes and Zakk Wylde. With Oceana, again an assemblage of some of the most talented players to ever strap on a guitar join Sherinian in the studio. Steve Lukather once again collaborated with the keyboardist for the tracks 'Mulholland,' 'Euphoria' and 'Seven Sins.' Former Planet X guitarist and fusion legend Tony MacAlpine laid down performances for 'Five Elements' and 'Mercury 7'. The one and only Steve Stevens is featured on 'Ghost Runner' and the title track 'Oceana'. Black Country Communion bandmate Joe Bonamassa makes an appearance as well on 'I Heard That,' while Doug Aldrich performs on 'El Camino Diablo'. Jimmy Johnson plays the bass on all tracks outside of 'Ghost Runner' and the title track which features Tony Franklin. Simon Phillips performs all drums on Oceana

Favoring a guitar heavy rock based approach to fusion ala Jeff Beck, itallows energy to come through the recordings, setting him apart from most jazz fusion in the process, making the music appeal to fans of technical heavy metal as well. In addition, touring with several well-known artists, including Billy Idol and the aforementioned Yngwie Malmsteen, Sherinian adapts to ever changing musical genres with ease while always maintaining his signature style. Earlier this year Über producer Kevin Shirley, opened the door for the keyboardist to join Glenn Hughes, Jason Bonham and Joe Bonamassa in the 'Supergroup' Black Country Communion. BCC s debut album has set the stage for Oceana to propel his inspiration in to the mainstream and continue to cement his legacy as being one of the premiere rock keyboardist of today. order