Les Paul: Guitar auction from The Estate of Les Paul. 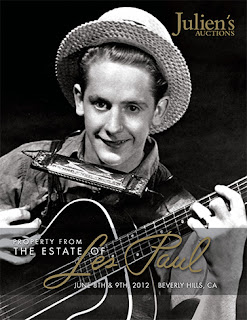 Julien's Auctions is proud to present Property From The Estate of Les Paul. Les Paul not only revolutionized the sound of the electric guitar, but also the technology behind modern day sound recording. Les Paul pioneered innovative techniques with sound-on-sound recording and commissioned the first 8-track tape recorder, which would become the core technology behind multitrack recording still used today. The sale will include property equipment, memorabilia and instruments that span the entirety of Paul’s career from his days as Rhubarb Red to his weekly Monday night concerts at the Iridium Jazz Club in New York City. Some of the guitar and equipment highlights from the sale include:
The proceeds of the auction will benefit the Les Paul Foundation established by Les Paul who was encouraged at a young age by his mother to follow his instincts regardless of how unusual or different his approach. Paul felt that establishing a foundation, which could provide that same encouragement to so many others was the best way to perpetuate the areas most important to him in his lifetime. The mission of the Les Paul Foundation is to honor and remember the life, spirit, and legacy of Les Paul by supporting music education, engineering and innovation as well as medical research. The Les Paul Foundation is an approved IRS 501(c)3 organization.
The Les Paul Estate Auction will be a moment to remember in the history of Rock N’ Roll. Be inspired by Paul’s innovations and see an unmatched collection of the most innovative electric guitars assembled in one place.