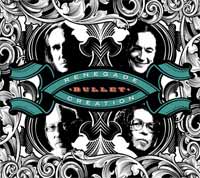 With engineering and production legend Ed Cherney (Rolling Stones, Bonnie Raitt, Bob Dylan) at the helm, Renegade Creation, featuring guitar greats Robben Ford and Michael Landau, bassist Jimmy Haslip and drummer Gary Novak, re-entered the studio to record Bullet, the super-charged follow-up to their critically acclaimed 2010 debut. Delivering a set of rootsy, blues/rock vocal tunes, the band draws on the unique guitar interplay between guitar giants Robben Ford and Michael Landau who inspire each other to new personal bests. Bullet is a guitar tour de force riding on the fierce rhythmic foundation of bassist Jimmy Haslip and drummer Gary Novak - one of the finest rhythm sections around. Renegade Creation brings to mind the essence of classic Blues Rock crossed with hypnotic vocal melodies and a touch of the adventurous sophistication of fusion, allowing each player’s phenomenal abilities to shine. The well-arranged compositions on Bullet, while brimming with fantastic soloing, exhibit a synergy rarely heard in music today. Demanding repeated listening, Bullet is guaranteed to remain on heavy rotation in any fans playlist.

Michael Landau is a renowned session guitarist and solo artist who has played on albums since the early 1980s by such notable artists as Miles Davis, Michael Jackson, Richard Marx, Joni Mitchell, Steve Perry, Seal, James Taylor, Laura Branigan and many others. Robben Ford began his recording career in the ‘70’s with the Charles Ford Band, a blues band with his highly musical siblings.

As Robben progressed more as a player he delved deeper into Jazz, joining Tom Scott’s band in 1974. After more than 30 years as a solo artist, Ford is widely regarded as one of the greatest guitarists in the world.

Jimmy Haslip is an in demand bassist and record producer, known by many fusion fans as a founding member of the pioneering fusion group, “Yellowjackets.” He was one of the first high profile players to routinely use a 5-string electric bass. Haslip has worked with many notable artists, including Tommy Bolin, Marty Friedman, Bruce Hornsby, Gino Vannelli, Allan Holdsworth, Chaka Khan, Donald Fagen and Anita Baker. He continues to be one of the most in demand bassists in the industry.

Gary Novak was born into a musical household and began drumming at age eight. After years of studying and working as a drummer he landed a gig with George Benson and subsequently joined Chick Corea’s band. He has also toured with many highly acclaimed musicians including Bob Berg and Allan Holdsworth. In 1998 he joined Canadian pop star Alanis Morissette’s band, recording and touring with her for over a year.