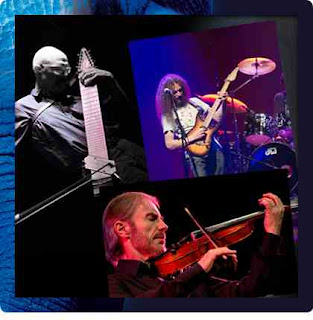 43rd Frankfurt Jazz Festival 2012
Filmed on 26/10/2012 | Online again for 91 days
Description
At first he would just have to be a benefit, among others, as there are both living in the National Association of Music Merchants Show in Anaheim, California, an event which takes place every year mid-January. And yet, when they left the stage after playing for the first time together, guitarist Guthrie Govan, Bryan Beller on bass and drummer Marco Minnemann could not help but exclaim: "But it is it works! We absolutely must furnish it! " It was almost by chance that the magician of the guitar, the British Guthrie Govan, eventually ended in Anaheim. One of her fans then recommends Bryan Beller, who had never heard of the prodigious virtuoso Chelmsford in Essex. Some views on YouTube have been sufficient to raise doubts. Guthrie Govan, 40, hit his first guitar at the age of three years. In 1993 with "Wonderful Slippery Thing", an instrumental piece now become a classic, he was awarded the coveted title of "Guitarist of the Year" by the British magazine "Guitarist". Once he met bassist Bryan Beller, both musicians were on the same wavelength. With drummer Marco Minnemann native of Hanover, they form a rhythm section that glow still runs at full speed. Between them, "The Aristocrats" provide the ultimate proof that even in the early 21st century, jazz rock has lost nothing of its turbulent energy.