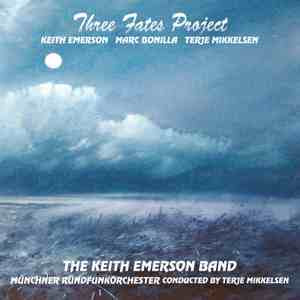 Three Fates Project contains both orchestral re-workings of ELP classics such as “Tarkus,” “The Endless Enigma,” “Abaddon's Bolero,” as well as Aaron Copland's “Fanfare For The Common Man,” Alberto Ginastera's “Malambo” and "American Matador" from Marc Bonilla’s second solo album, as well as brand new compositions: Emerson’s “After All Of This” and Marc Bonilla’s “Walking Distance,” and “The Mourning Sun.”

The album was recorded in Munich and Los Angeles over a nine- month period starting in the summer of 2011. It features the 70-piece Münchner Rundfunkorchester conducted by world-reknown Maestro Terje Mikkelsen, who has been often referred to as "one of the few conductors with a rock 'n roll soul," and the Keith Emerson Band with veteran Emerson bassist Travis Davis and drummer Troy Luccketta, from the multi-platinum band Tesla.