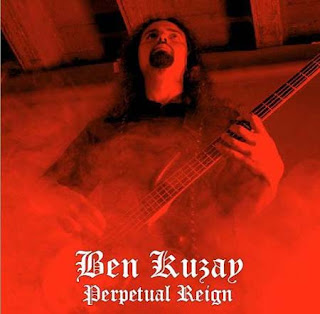 Neo-classical bassist Ben Kuzay will embark upon his "Introspection" U.S. Tour as a one-man show on February 28th, and continue on the road through April 6th. About the upcoming jaunt, Kuzay had this to say: "I'm going to be giving my fans a fully-organic show with no backing tracks. Most of the concert will consist of solo bass pieces, and the rest will be comprised of solo keyboard and solo guitar pieces."

Kuzay has played alongside musical masterminds such as Richard Christy (Death, Howard Stern Show, Ex-Iced Earth), David Harbour (Michael Harris, Ex-King Diamond, Ex-Chastain), and Duane Timlin (Divine Empire, Forest Of Impaled). Kuzay has toured the United States as a member of bands such as Monstrosity, and toured the Mid-West with his solo project (as a two-piece), but this is going to be the first full U.S. tour that he has done in the context of his solo project. "A lot of my fans from all over the world have been, for years now, requesting me to tour. Last year, we hit the Mid-West, this year I'll hit the U.S., then next year, hopefully the world."

Here is Ben Kuzay performing his solo music live, as will be seen on this tour:

This is Ben Kuzay as a four-piece band: