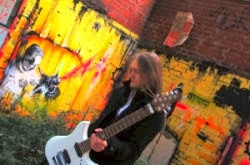 The second part of the 4-EP cycle I started with "Fear Is The Enemy" is being recorded right now and will be released in early 2014. The titel is "Reverse Engineering" and it will consist of the following songs:

The record will be released and available in two different versions: instrumental & vocal. "Model man" is a cover/re-arrangement of a King Crimson song.