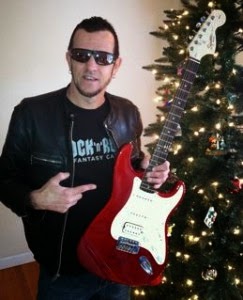 In 1995 the first Gary Ho Ho Hoey album was released. Hoey's idea to put a rock edge on Christmas classics was inspired by his mother’s love for Christmas and growing up in Lowell MA with his 4 sisters. “With the last name, Hoey, I decided one day to record an album called Ho Ho Hoey and re-do some of my favorite Christmas classics with a rock guitar." It was an instant hit at radio and sold over 350,000 copies and has been a staple at most rock stations around the country ever since. "I love doing the Ho Ho Hoey Rockin Holiday Tour every year because I get to give back and help folks with various charities and toy drives. It allows me to help communities and have some fun at the same time. And it’s Hoey’s loyal fan base and his connection with them that keeps him going. “I come out after every show to meet the fans,” says Hoey. “I enjoy the feedback and interaction.”

Gary will also be performing songs from his latest release, “Deja Blues,” available now on Wazoo Music Group. “This is an album of original blues songs I’ve wanted to record for a long time. The Blues has always been near and dear to my heart. I have so much respect for it. When I’m recording a blues song, it’s a 5 minute journey and you can’t take a breath, you can’t keep punching in the recording button to fix stuff or it loses the vibe.”

At sixteen, Hoey often lingered outside Boston's renowned Berklee College of Music making friends and offering to pay for lessons. To devote more of his time to music, the prodigy would cut high school classes so that he could hone his guitar playing skills all the while playing Boston's local clubs and teaching guitar to avoid a day job and keep the guitar in his hand.

Hoey’s first break came in 1987 when Ozzy Osbourne showed up in Boston looking for a guitarist. Osborne liked Hoey’s tape enough to fly him to LA for an audition. The gig went to Zakk Wylde but Ozzy suggested Hoey move to LA seeing his talent. He took Ozzy's advice and with $17,000 he saved from teaching Hoey loaded the U-Haul and drove across country to LA. In 1992 Hoey released "Heavy Bones" on Waner Bros. a rock vocal album with Frankie Banali on drums from Quiet Riot. Heavy Bones got caught in the grunge backlash and the album went unnoticed with a million dollar debt after album cost, promotion and video the band got dropped. 1993 Hoey asked Warner Bros. if he could record a low budget album for fun of instrumental rock. He recorded the successful "Animal Instinct" album ($15,000 budget) which included a cover of the Focus hit, "Hocus Pocus". Not only did the hit rocket into the Billboard Top 5, outpacing all other singles as the most frequently played rock song of the year, but the album went on to reach classic rock notoriety. With a collection of 19 albums it's no wonder Gary Hoey is listed as one of the top 100 guitarists of all time.

Recently, Hoey produced and co-wrote The Queen Of Metal Lita Ford’s latest release “Living Like Runaway” for SPV records to rave reviews. “It was a thrill to work with Lita… She is a true rocker and a pioneer for woman in rock. And lastly, she’s a kick ass guitar player”. To this day the guitar aficionado continues to tour extensively, endorsing Fender guitars and Amp, Monster cable, GHS Strings, Rocktron to name a few. He has been involved with the Rock n Roll Fantasy Camp as music director to include his stint at “Campalooza 2013 in NYC jammin' with legends like shred-maestro Yngwie Malmsteen, blues icon Johnny Winter, Robben Ford, the time-honored rocker Leslie West of Mountain and co-founding member of KISS Peter Criss. Hoey has toured and traded licks with the likes of Jeff Beck, Brian May of Queen, Joe Bonamassa, Ted Nugent, Joe Satriani, The Doobie Brothers, Foreigner, Styx, Steve Vai, Eric Johnson, Peter Frampton, and Dick Dale.