Tom Lippincott: Harmonic Major Scale and The Joy of Practicing 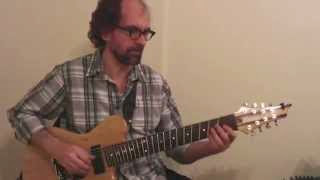 For decades, jazz musicians have been utilizing harmonies and sounds from the major, harmonic minor, and melodic minor scales, as well as symmetrical scales like whole tone, diminished, and augmented. Another scale, named by Rimsky-Korsakov in 1885, hasn’t been implemented nearly as much: the harmonic major scale.

In recent years, some innovative jazz musicians have begun to explore this scale’s harmonies in depth, but plenty of unexplored ground with unique and beautiful sonic possibilities still exists.

This class is intended for intermediate to advanced level jazz guitarists who already have a strong grasp of the traditional jazz guitar vocabulary and who are interested in injecting some new life and fresh, modern sounds into their playing.

This class first explores the basic structure of the harmonic major scale, as well as the harmonies generated by the scale. Next, a clear and systematic way to map out the scale’s location on the guitar fingerboard is presented, along with many different exercises and patterns to help the student develop melodic flexibility with the scale.

The class also explores, in depth, the diatonic harmonic major triads and seventh chords, including the drop 2 and drop 3 chord scale exercise similar to that used in the Jazz Guitar Harmony series but applied to the harmonic major scale. Then, a complete guide is presented for using all seven modes of the scale in improvised situations, both harmonic (comping) and melodic (soloing), with examples for each sound.

Finally, two etudes, one harmonic and one melodic, are demonstrated and analyzed using the chord changes from the popular standard “Stella By Starlight” in order to give a concrete example of how the sounds from this structure can be used by the jazz guitarist.

This class provides a logical, systematic step-by-step approach for developing fluency with the harmonic major scale and attaining mastery of its melodic and harmonic possibilities.
The Harmonic Major Scale covers:

- basic structure of the scale, including diatonic triads, seventh chords, and upper extensions for each chord/mode
- system for scale fingerings in all areas of the neck, along with an alternate scale fingering that presents a symmetrical, easy-to-remember fretboard shape
- numerous exercises for gaining melodic fluency with the scale including intervallic patterns, rhythmic variations, and triad, seventh chord, and extended arpeggios
- fingerings for close position seventh chords and 4-part-4th chords that can be played as chords or arpeggios
- in-depth exploration of triads diatonic to harmonic major, including diatonic cycles (with an explanation of the cycle concept)
- brief review of the terms "drop 2" and "drop 3" with example chord voicings
- the "chord scale exercise" which is a logical and musical presentation of drop 2 and drop 3 voicings by inversion and string set, using the seventh chords diatonic to the harmonic major scale, with subtitles on the video that match each exercise to the written example
- additional methods for developing mastery of the above voicings including inversions and diatonic cycles
- outline of the uses for each of the seven modes of harmonic major with musical examples
- traditional analysis of the chord progression for “Stella” with the typical scales and modes as a basis for comparison, followed by an analysis that uses harmonic major sounds on every chord of the tune
- two etudes on the “Stella” changes, one single-note and one chordal/comping, demonstrating real world applications of the harmonic major concepts
- running time: 113 minutes
- includes 28 pages of written examples and exercises
- All musical examples from the video are provided in music notation, tablature, and chord grid form.
- Each example performance in the video is titled and numbered for easy navigation.
- MP3 backing tracks for written examples and solos, including full-length track for improvisation