BB King: Passes away at the age of 89 RIP

The king of blues guitar... a giant of the genre passes away at home after a short spell of treatment in hospital. RIP

Attorney Brent Bryson tells The Associated Press that King died peacefully in his sleep at 9:40 p.m. PDT Thursday at his home in Las Vegas.

I am very, very saddened today to hear that
Mr B.B. King is no longer with us.
With the exception of Mr King's family and close
friends, who have my deepest condolences, I can think
of "no one" who can say more than Mr Eric Clapton
does in his very moving video, both for himself, and also all of us!
Thank you MR KING for your amazingly inspiring talent and all the tremendous music you have shared and continue to share with us all.
Rest In Peace MR B.B."KING" 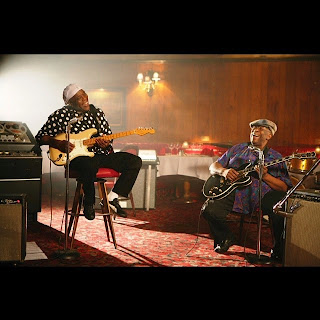 Buddy Guy
This morning, I come to you all with a heavy heart.
BB King was the greatest guy I ever met. The tone he got out of that guitar, the way he shook his left wrist, the way he squeezed the strings... man, he came out with that and it was all new to the whole guitar playin' world. He could play so smooth, he didn't have to put on a show. The way BB did it is the way we all do it now. He was my best friend and father to us all.
I'll miss you, B. I love you and I promise I will keep these damn Blues alive. Rest well.
All my love,
Buddy 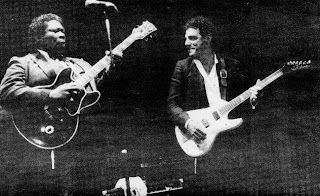 God bless you BB... Rest in peace my friend. Thank you for all that you did for this kid... my condolences to his family and band.

“For many of us the thought of not having BB King on this earth seemed surreal. A man larger than life who was a constant, something you can set your watch to. The sun will rise and fall and B.B. King will play the blues. Sadly, today the sun rose but the music was silent. To say that the loss of B.B. King is devastating to the blues community is an understatement. He defined the blues, he was the blues. He brought blues to an audience that would never have found the blues if B.B. was not the conduit. Never again will there be another as good, gracious or as kind as Mr. King. When Mr. King came off the road last year I couldn't believe nor wanted to accept that I would never hear his nephew Walter King introduce him again, ‘Ladies and Gentlemen, the King of the Blues, Mr B.B. King!’ That combined with the fast shuffle and the horn stabs as the man himself walked onstage was enough to convince this kid on May 24, 1990 that a life in the blues was for me. The excitement those words caused over the thousands of shows to the millions of people will never be matched or equaled. Those shows that I saw - almost 50 in total over the past 25 years - changed my life. Thank you Mr. King for the inspiration, the motivation, the support, your friendship and, most importantly, the music which I love so dearly. Rest in peace, my friend.”


Carl Verheyen
I got a chance to work with BB King many years ago when I composed the TV commercial music for the One Touch Diabetes blood sugar tester. Playing rhythm guitar on a track he sang and played on was such an honor, even if it was just a jingle. BB King was absolutely magical. The entire world will miss him!

Neal Schon
R.I.P. BB we will All miss you

Willie Nelson
The world lost an incredible musician and dear friend to Willie. Our hearts go out to all near and dear to Mr. B.B. King.

Billy F Gibbons - ZZ Top
"It's difficult to fathom a world without B.B. King... He's been with me literally since the dawn of my musical consciousness. I first encountered him when I was a small child. My father was a musician and would take me around to studios in Houston. We met B.B. King at ACA Studios when I was, maybe, 7. He made a huge impression on me and that encounter continues to resonate" –

Eric Johnson
B. B. was the best; the most elegant bluesman, the greatest singer, guitarist, storyteller and entertainer. We knew he was ill and elderly,but it still gives me profound and emotional pause to reflect about his life.  He had a great life; he made millions of people happy and filled with joy. He lived to be 89 years old, enjoying playing, recording, and touring to the final months of his time on earth.
I treasure the times I was privileged to play with him during our tour together. He gave me some very powerful artistic advice which I will always carry with me. The most sacred part of my
memories of him was that he was absolutely one of the nicest, considerate and kind persons I have ever worked or toured with.He is a big inspiration to me in a number of ways. We have all been influenced by him.

He was the best, a most elegant bluesman.

Peter Frampton
My heart goes out 2 BB King's family today & all who loved him. A great friend & amazing gtr player leaves us peacefully. We will miss u BB. 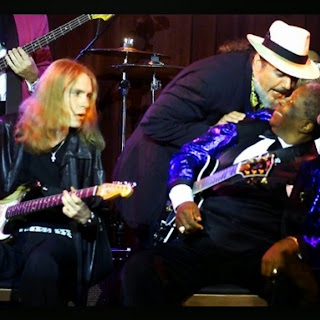 Kenny Wayne Shepherd
Farewell BB King. You were like a father to me in many ways over the years. The world is a much better place because you were here. Rest In Peace my friend. The Thrill Is finally Gone. #BBKing #RIP


June Millington
point he called me over from the wings, and this was snapped. Thank you, BB. Ever the gentleman. Fly on, I know you are enchanting, still, wherever you are. (for anyone who has "Play Like a Girl", the cut "Fall On You" was written just as I was getting ready to drive out to the Midwest. You were gonna brush wings with BB? A song was gonna come … effortless, haunting, acoustic slide and voice. When BB calls with a song, you drop EVERYthing). xx

Samantha Fish
Thank you for the inspiration BB King! He touched my life and millions of others. Celebrate life, that was always the message I took from him. I'm thankful that we got him for as long as we did. RIP Mr. King. http://youtu.be/7JXkGM5V9hU

Joanne Shaw Taylor
Rest in peace BB King. I don't have the words to accurately describe his talent or his influence on me and the millions of others his music touched. I was obviously very sad to hear the news of his passing today but tonight I'll be raising a glass to the amazing life he lead, the gifts he shared with us in that lifetime and the legacy he left us with. Thank you BB......Long live the king!. JST x

Jennifer Batten
I used to have recurring dreams about this man. We would meet on the street and talk guitar. Enjoy your next chapter sir!

Desiree Apolonio Bassett
I'm not going to lie.... Tonight was probably one of the most intensive and emotional performances we've had all of this tour. In dedication to BB King, I played a blues solo I honestly never felt before and I nearly cried playing it.... One of the other most heartfelt performances of the time we've been together! And on another note, I played another half of a set with only 5 strings lll


Kristen Capolino
RIP BB King! I'll never forget seeing him for the first time at the Civic Center. Lol I was so young and new to shows that when he through his pick out, I tried to give it back to him! He is another one of the greats we will never forget. I bet he and Gary Moore are playing Thrill Is Gone right now!

Susan Tedeschi and Derek Trucks
From Derek: "It's a sad day. A thread was broken for sure. He was the last of the giants.

We were lucky he was here as long as he was. And getting to know him and share the stage a few times is more than you could ask for. We are listening to him now and the bus just passed the exit for his hometown, Indianola MS.

We will miss you B.B. #RIP #BBKing

True master and a legend has left us RIP BB King!
God Bless, 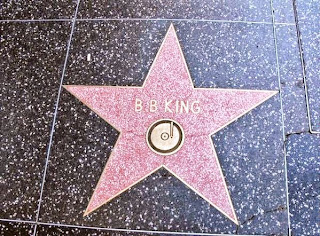 Gladys Knight
Uncle BB, truly a shining star! May your legacy continue to live on until the end of time. #BBKing

Alex Skolnick
Playing fast is fun but saying a lot with a little is precious. #BBKing exemplified this. Another life changing album

Richie Sambora
My friend and legend BB King passed.. I'm so so sad....he was so great to me... We've lost the King..... My love and prayers to his family.

Dave Martone
My story on BB King may he rest in peace.

Years ago while attending Berklee College of Music in Boston, I was studying under a great professor named Bruce Bartlett. Bruce was a great fusion guitar player and I studied with him for one semester. Of course back then I was trying to play 500000000000 notes a second, and Bruce could see what I was lacking in my playing.

I remember the lesson clearly.

He told me to pick up a BB King album and listen to one song in particular. Unfortunately I cannot remember what song it was, and he told me to learn it. I remember doing this of course, thinking it would be very easy. WELL!!!! Let me tell you I was schooled! What I learned was how much Mr King was able to play around with his timing and feel of the beat. To get his exact inflections was incredibly difficult. To this day I still use a few of his licks I learned from that great experience that Bruce and BB King taught me so long ago. Rest in Peace BB King and thank you for all of your music.

Jon Gomm
I met BB King when I was 13, he let me play his guitar backstage. He was very kind and funny, made an awkward kid feel great about himself.

Gary Hoey
Very sad news that BB King passed away. My condolences to his family. His thrill will never be gone! #longlivetheking


Richard Daudé: "The thrill is gone"