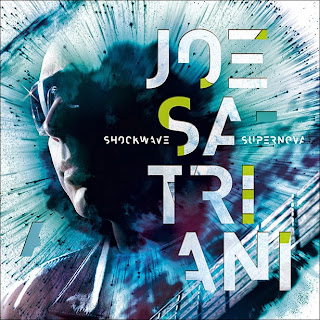 The album will be released on CD, download and 2 LP vinyl.  Satriani’s World Tour begins 17th September in Europe (US Tour planned early 2016).  The UK leg of the European tour starts November 1st at the O2 Apollo Manchester with special guest Dan Patlansky.

It would be easy to call Shockwave Supernova a “masterpiece” or “the last word on guitar” from the world’s most commercially successful solo guitar performer.  Satch, however, sees it much more personally. He has consistently advanced the artistry of the instrument; an effort he dedicated himself to on 18th September, 1970, the day his idol Jimi Hendrix died.

Recorded late last year at Skywalker Sound in Lucas Valley, California, Satriani assembled the dynamic trio of world-class musicians who had recently been part of his global tour; renowned keyboardist and guitarist Mike Keneally, a veteran of several Satch outings and recordings; along with drumming whiz Marco Minnemann and bass extraordinaire Bryan Beller. “I couldn’t have asked for a better band to help bring these songs to life,” says Satriani.

The album also sees Satriani once again joining forces co-producer and engineer John Cuniberti. Satch and Cuniberti share production on Shockwave Supernova, as they have on numerous albums – their shared history dates back to the guitar star’s 1986 debut album, Not Of This Earth and its follow-up, the platinum-selling, critically acclaimed, Surfing with the Alien.  Click here to access the full online UK press release page - www.noblepr.co.uk/Press_Releases/joesatriani/shockwave-supernova.htm.