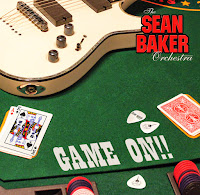 Shredguy Records is proud to announce its twenty seventh release, The Sean Baker Orchestra-Game On!! The album features thirteen tracks of melodic shred guitar music by a group of stellar musicians. Lead by guitar virtuoso Sean Baker, The Sean Baker Orchestra is a three piece band, that creates musical mayhem but all in a melodic and accessible way. Along with Sean, The Sean Baker Orchestra is bassist David Donigian, and drummer Clint Sabon. Joining the band with guest appearances are Marc Rizzo(Soulfly), Toby Knapp(Onward, Where Evil Follows), Jeff Martin(Racer X), Ronnie Munroe(Metal Church), among others. Thirteen tracks of virtuosity on what will surely be one of the best guitar album for 2015.
“It’s great to be working with a guitar player of Sean’s caliber and character” says Shredguy Records’ Michael McDowell. “He is an aggressive player, but doesn’t forget melody, and for as great a player as he is, he isn’t one of these pretentious stuck up dudes who are delusional. He enjoys his life, and creating music, and it comes across in his playing. And the guys he assembled for this release all did a fantastic job; fans are going to love this album!”

Getting great reviews! Pick it up today and support the music!