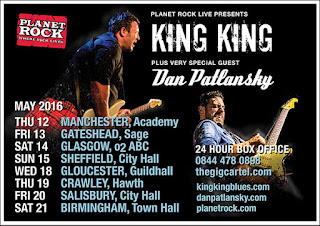 Having scored two recent radio hit singles on Planet Rock with the songs Crazy and Hurricane, and a recent nomination for Best New Band at this year’s Classic Rock Awards, King King are going from strength to strength. Their third studio album, Reaching for the Light, has been championed by dozens of music magazines including Classic Rock, The Blues, Guitarist, Blues Matters, Blues in Britain and many more. In the New Year the band will record a full electric session for Paul Jones Blues Show on BBC Radio 2.

Dan Patlansky; South African blues rock guitarist and singer-songwriter, whose Dear Silence Thieves album was voted No. 1 on Blues Rock Review’s Top 20 Blues Rock Albums of 2014, will be King King’s very special guest. Fresh off his UK and European tour with JoeSatriani, and one of Classic Rock magazine’s hotly tipped new artists of 2015 to watch out for, Patlansky’s last studio album, Dear Silence Thieves has received non-stop accolades and praise from the British press. He opened for Bruce Springsteen in front of 64,000 people at the FNB Stadium in Johannesburg in February 2014.