Simone Gianlorenzi: teaser for "About her" is the debut solo album 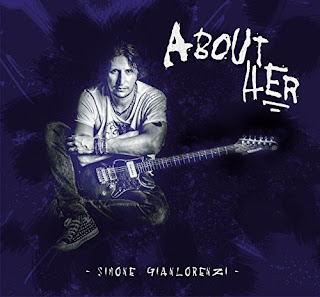 "About her" is the debut solo album by guitarist Simone Gianlorenzi.

The album contains eight instrumentals ranging between different musical genres without losing the grit and passion of rock. Reading the names of the tracks, as well as listening to them, it is not hard to find more or less explicit references to the great names of the guitar and music while maintaining a certain originality and personality. There is the technical and energetic rock of Eddie Van Halen, the most pop of U2 and Tears for Fears, and even the most electronic of Depeche Mode and Björk. The melancholy of Bob Marley's Reggae, the lyricism of David Gilmour up to the noise of Nine Inch Nails or to the alternative sounds of bands like Radiohead or Muse, till sounds vaguely psychedelic like The Beatles. Rarefied atmosphere, sounds long and spacious opposed to tight and energetic rhythmics.


Atmospheric and caressed guitars or energetic fiery rock guitars, Gianlorenzi always maintains a style and a personal voice on the instrument both as a performer and as a composer.
A key element of this album is the conception of the guitar that is absolutely the protagonist, as you would expect from an album of a guitarist, but without being unnecessarily predominant leaving with respect the right breath to the compositions. Not a claustrophobic guitar album, but an album of music enjoyable even by non-guitarists and by all lovers of instrumental music.

All tracks composed and produced by Simone Gianlorenzi with the precious collaboration of Fernando Alba as artistic consultant and Alessandro Paolinelli as associate producer. Musicians who play on the album are some of the most respected on the Italian music scene: Marco Rovinelli on drums, Pino Saracini, Pierpaolo Ranieri, Mario Guarini and Valter Vincenti on bass.