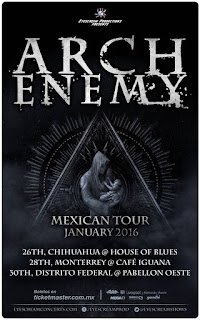 In January of 2016, Mexico will serve as host to Extreme-Metal icons ARCH ENEMY for three special events. These dates will kick off with the bands first ever appearance in Chihuahua, at the House of Blues. Night two will see a performance in Monterrey, at Café Iguana, with night three landing at Palacio de los Deportes' Pabellon Oeste. This particular event will boast a setlist of exclusive songs and feature very special guests, ARMAGEDDON, which features Michael Amott's brother / ex- ARCH ENEMY guitar player, Christopher Amott.

On the upcoming performances, ARCH ENEMY Chief song-writer and band leader Michael Amott comments:
"Very excited to have the opportunity of returning to Mexico for three shows in January 2016! Mexico has been host to some of the craziest and most intense Arch Enemy shows - and this time will be no different I'm sure. This is War Eternal! ¡Que viva México!"
Tickets are available at TicketMaster for Mexico City and Chihuahua and for Monterrey on Super Boletos.
North America will see ARCH ENEMY make a special appearance at the 2016 NAMM conference at the Schecter after party. Mark your calendars now for these not to be missed events!
The current release, War Eternal, from ARCH ENEMY was named one of the best albums of 2014 by Guitar World, Metal Injection, and many more and is available now
at http://www.cmdistro.de/Search?q=arch%2Benemy%2Bwar%2Beternal and all music retailers.