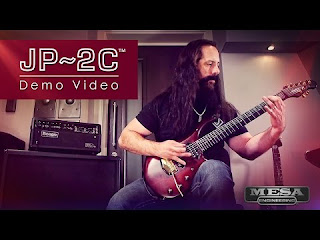 http://www.mesaboogie.com/amplifiers/...
Introducing the JP-2C! As icons of guitar and amplification, John Petrucci and the Mesa Mark IIC+ both hold positions of excellence for tone. Mesa founder Randall Smith, “Tone Boy” Doug West and John Petrucci are truly THE world’s foremost experts on the legendary history and tones of the Mark IIC+. In a fitting tribute to the extraordinary loyalty John has shown by using Mesa amplification exclusively for almost 30 years, the JP-2C represents a faithful reissue of the circuit and tones John has used on nearly all recordings and live performances with Dream Theater and his solo albums in his career. With John’s live performance requirements in mind, the fabled Mark IIC+ circuit was adapted to a modern day feature set without the compromises of controls that are found in the original IIC+ control set. With great pride, appreciation and gratitude, we present the MESA/Boogie John Petrucci Signature IIC+ Head.

Beyond the iconic C+ circuit and tones, core features like two assignable five-band graphic EQs, full MIDI implementation, assignable and switchable SHRED modes as well as pull functions for Gain Boost and Presence functions and a full featured CabClone for direct output round out just some of the key feature elements of the modernized IIC+ feature set in the JP-2C.

From all of us at Mesa and fans, tone-chasers and performers around the world, our sincere and heartfelt thanks goes to John Petrucci for his exceptional loyalty and unwavering dedication to his craft, tone, and to Mesa/Boogie for all of these years. A new era of IIC+ high gain and exceptionally crisp, detailed and punchy cleans with modern accessibility and control is finally here. The JP-2C Signature IIC+ Head.

Recorded with John Petrucci Ernie Ball Majesty 6 & 7 string guitars with DiMarzio John Petrucci Illuminator pickups into a Mesa 4x12 Traditional Straight Cabinet with Celestion Vintage 30s. Mic’d with a Mojave FET 301, Royer 121 and Shure SM57, into Neve 1081 preamps and bussed to a channel into an SSL Duality 48 console. Delays and reverbs are a TC Electronic 2290 and a Bricasti M7 Reverb. Engineering by Rich Chycki. Recorded at Germano Studios, NYC, November 11, 2015.

And for Dream Theater fans, check out the new double album The Astonishing, featuring ALL JP-2C tones throughout, in stores now:
http://www.dreamtheater.net