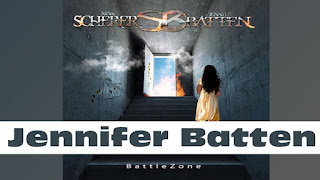 Scherer/Batten is of course, none other than vocalist MARC SCHERER (Scherer/Peterik) and star guitarist JENNIFER BATTEN (Jeff Beck, Michael Jackson). PREORDER NOW: http://melodicrock.com/articles/melod... Together the pair have teamed up with the same musical talent that featured on the 2015 Peterik/Scherer album ‘Risk Everything’ together with some fresh new faces to help craft an absolute melodic rock gem. ‘BattleZone’ features material exclusively from the Jim Peterik (ex-Survivor, Pride Of Lions, The Ides of March) songbook. Featuring 8 rare musical gems from Jim’s songwriting vault, the album also features 3 brand new tracks, written for this project. That’s 11 new classic songs, produced by Jim Peterik and featuring the impressive lineup of:
All Lead Vocals: Marc Scherer
All Lead Guitars: Jennifer Batten
Backing Vocals: Marc Scherer, Bill Champlin, Bryan Cole, Brian Hemstock, Danette Pahl
Alternate Lead and Rhythm Guitars: Jennifer Batten, Mike Aquino, Dave Carl, Jim Peterik
Bass Guitars: Bill Syniar, Klem Hayes
Keyboards: Jim Peterik, Christian Cullen, Chris Neville, Barb Unger
Drums: Dave Kelly, Ed Breckenfeld
Sax: Mindi Abair Additional credits include:
Executive Producer: Danette Pahl
Engineered by: Larry Millas
Mastered by: Larry Millas at World Stage Studios and JK Northrup at Alien Productions
Mixed by: Jim Peterik and Larry Millas
Keyboard Programming: Larry Millas and Christian Cullen
Art Direction and Cover Art: Nello Dell'Omo Jim Peterik comments: “As a long time enthusiast of Marc Scherer's vocal chops and the expertise of rock guitar goddess Jennifer Batten, you can imagine how excited I am at the release of Scherer/ Batten ‘BattleZone’ album.
As a song writer and producer, it was a dream come true mining some lost gems from my many years in rock, producing them to a new lustre and even writing three brand new cuts with Marc and Jennifer - Cuts Deep, The Harder I Try and the title track BattleZone.
Andrew McNeice and Danette Pahl of Melodic Rock Records gave me the artistic leeway and financial support to create the album of a lifetime.
Working with one of the best engineers in the business, Larry Millas, and musicians like multiple Grammy Award Winner Bill Champlin of Chicago, bassist Bill Syniar (formerly of Survivor), Mike Aquino (guitarist and singer from World Stage), and two-time Grammy Nominated saxophonist, Mindi Abair, along with Dave Kelly and Bryan Cole, brought depth and texture to the tracks that is palpable.
You can hear our excitement in every song. I guess you can see I'm pumped.
I dare you to crank up BattleZone or Tender Fire or Crazy Love and not rediscover why you fell in love with melodic rock in the first place. I double dare ya!!” Jennifer Batten: “It was such a pleasure to jump into such a high level inspiring project! Marc’s vocals are out of this world, the grooves are kickin’, and working with Jim Peterik is so joyous and creative. I can’t wait to take this to the stage!” And finally, the vocalist fronting this extraordinary project, Marc Scherer: “Even something as innocuous as lunch with Jim Peterik can inspire great things…
It was during one such meeting that Jim and I conceived of an album showcasing his lost musical treasures. Thanks to the contributions of long-time Peterik enthusiast and personal friend Danette Pahl of MelodicRock Records, we now have lift-off!
While the brain trust of talent surrounding Jim enhances any idea, this album is extra special because it features a collaboration with one of the world’s greatest guitarists, Jennifer Batten – who played three world tours with Michael Jackson and two with Jeff Beck. They say you know when it’s right in the first 30 seconds, but in this case, you can sense the magic in the first few notes. BattleZone blends the songwriting craftsmanship and storytelling genius of Jim Peterik with the artistry of some of the most amazing musicians in the business. As Jennifer observed, the battle can be internal: the fight to be better, to raise the bar and challenge yourself while stirring the musical cauldron. I truly believe that we have captured lightning in a bottle and I’m so eager for everyone to share in this experience.” Scherer/Batten ‘BattleZone’ will be released via MelodicRock Records on CD & Digital September 22. -Video Upload powered by https://www.TunesToTube.com